Despite the clear signs of intelligence displayed by many animals that indicate they are not nearly as far away from humans on the cognitive scale than some folks have liked to think, I still believe that there are aspects of intelligent life that we hairless primates possess that other critters do not. 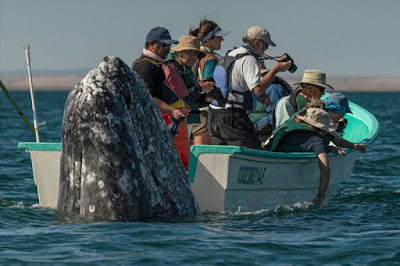 As this gray whale demonstrates, comedic timing appears to be one of the ones that's shared. The mother whale popped up behind this group of watchers while their attention was fixed on her baby. Had she decided to go full funny and tapped the guy in the back and asked, "What are you guys looking at?" she could not have done better. Of course, at 40 tons with a flipper 6 to 10 feet long, "tapping" might involve sinking the boat.

The story at Neatorama points out that the behavior, called "spy-hopping," is not that uncommon and happens when the whale spots something it wants to look at more closely.

The beginning of summer is also, of course, the day with the most sunlight of any during the year. Even though this year it's on Monday, it seems like this song sums it up best.

-- According to this item at CBR, the creators of Amazon's version of Garth Ennis's sorry blood-and-sex superhero deconstruction The Boys are being bothered by all of the people asking them when Season 3 of the show will debut. I'll take a Gen-X neener-neener moment to point out that we always knew when the new seasons of TV shows started: In the fall. But my real note is how the showrunners responded, by telling fans that every time someone asks when Season 3 starts they push the start back one day. I unsure of my next step: To happily pay no attention to the show and continue not asking when it starts, or take the tweet seriously and ask at least once a day from now until I die.

-- In a not "Okay fine" development, actor Frank Bonner passed on Wednesday at the age of 79. Bonner was best known as the hapless ad salesman for the mythical Cincinnati radio station WKRP on the television show of that name and he would frequently respond to situations well and foul with the aforementioned two-word statement. His signature feature was his endless wardrobe of the loudest suits and ties the 1970s could offer, and he assisted Arthur Carlson's "Turkey Drop" from the helicopter, shoving turkeys into the air even though they could not fly.

-- Cultural studies have a hard time drawing the lines between the so-called generations that they study. The basic names and major characteristics are clearly known: The Greatest Generation saved the world from Hitler and Tojo, but then brought their average waaaay down by creating the Baby Boomers. Millennials are much maligned as snowflakes unable to handle reality, when in truth that's a better description of Gen Z. And Gen-X, mentioned above, would be happy to be left out of all this anyway. But when did these generations start and end? While it's easy to set the arrival of the Boomers as beginning about nine months or so after V-E Day in 1945, when did they finish? Some writers use a 20-year frame, ending the Boomers at 1960 and beginning the X'ers at 1961. Some keep the duration but extend it to a more logical finish date and begin X'ers in 1965. Since that last one sorts your humble correspondent with the Boomers he rejects it utterly, buries it upside down and salts the earth over its cursed coffin. Others use a number of shared cultural experiences and also consider the generation of the parents having the children, but that involves work and generational theorists hate work when stereotyping shorthand will do.

Blogger Brian Noggle has come up with a much simpler and, I think, potentially more useful metric: Which actor do people picture when they hear the name "Spider-Man?" Boomers and some older X'ers will remember television's Nicholas Hammond (and some Adam West-quality wall-climbing sequences). The main group of X'ers is likely to recall Tobey McGuire (and Kirsten Dunst looking particularly lovely). Millennials and Gen Z will probably think of Tom Holland (and their Gen-X dads will gaze fondly upon Marisa Tomei as a whole new kind of Aunt May). Noggle suggests, and I concur, that if the name "Spider-Man" brings to your mind Andrew Garfield you may very well be one of Vlad Putin's sleeper agents, awaiting your chance to destroy America from within while cackling maniacally over the ruins of our weak Western civilization. I may have dressed that last sentence up a little bit.

I think he's on to something, though, and recommend he submit it to a university cultural studies department forthwith.

The interesting thing to me about this Physics World story is not how an experiment might have found some clues to how much a muon wobbles (Friar answer: Depends on the vodka), or about the problems observational bias can cause when evaluating an experiment.

It's that this hunt has been going for about 60 years and still isn't quite where it wants to wind up. That's some determination.

Author Tom Wood is wrestling with the difficulties of making an amoral anti-hero the protagonist of a book series. On the one hand, he can't allow too much character development unless he's ready to wind up the series and start on something new. When the series has been successful, as has his "Victor the Assassin" novels, the publishing industry is not always happy with that unproven new ground.

But on the flip side, he has to have some movement for his lead, or else every story turns into another couple hundred pages of Victor running surveillance detection routes, demonstrating the kind of paranoia you'd probably need if you were an international assassin and killing a half-dozen or more people either between him and his target or between him and his getaway. The average reader can't really connect with an anti-hero protagonist who remains amoral throughout a series. Donald Westlake wrote 16 Parker novels as Richard Stark up through 1974, with his pseudonym outselling his actual name. But then he hit a spell when he had little to say with the character and the next new Parker novel didn't show up until 1997.

Wood has dipped a toe in Victor's "good side" before, such as in Better off Dead/ where he tries to protect an old colleague's daughter, or A Time to Die, when he employs his skills against an evil man in order to remove him from the world and not just to get paid. In both cases he's violent and lethal, though his ultimate goal is a little less tarnished than usual. But Wood always lurches back, either unable or unwilling to put any consistency into a real arc of character growth. His books aren't any less repetitive than, say, Lee Child's, but Jack Reacher can keep readers coming back because his goal, besides being left alone, is to put the bad guys down. After awhile, it's hard to root for a lead character whose goal is the death of people he doesn't know so he can get paid for it -- and who's willing to kill any random person who might lead to him being caught.

A Quiet Man does dig more into Victor's past than Wood has ever done before and makes a bold early move that helps us focus more on Victor as a person than as a killing automaton. The driving element of the narrative doesn't really relate to his current assignment -- in his cover identity he is stirred by meeting a young special-needs child and makes a promise to the boy and his mother. When they vanish he wants to find them, both to assure himself that they are OK and to fulfill his promise. His ruthless adherence to his profession's best practices cross purpose with his equally fervent drive to keep his word and, for some reason he can't understand, he chooses keeping his word despite the potentially fatal consequences.

Wood drizzles the biographical sprinkles into the story with a light touch, and solidly connects them to actions Victor subsequently takes. Victor's somewhat loftier goal doesn't lessen his own frigid lethality and almost sociopathically violent tactics.

Unfortunately we have to go the long way to get to our resolution with some sidetracks that are clearly filler. A Quiet Man isn't really more than a novella in disguise as a full novel, as Wood even deploys the old standby of starting the action in media res before flashing back a few days to tell us why everyone's where they are and what they're doing, in order to be able to repeat a sequence and lengthen the page count. A set piece with the mobsters who hired him also adds page count more than anything else.

A Quiet Man was a welcome comeback after a three-year hiatus in the series, but we'll have to wait to see if Wood solves his seesaw problem between making Victor merely bad and making him worse than bad, and to see if he has some more fully-developed stories awaiting release from his keyboard.

Off With Its Icing!

When you're the Queen of England, and you're in England and you think you'd like to cut a cake with a sword, then you get to.

The best part of the video is when someone off-camera tells Her Majesty that there's a knife she can use, she informs her, "I know there is." Go back four or five hundred years, she might have used the sword on her after she was finished with the cake.

Scanning through Physics World for the occasional article that I can understand, I found my favorite exotic state of matter showing up again! Yep, good old quark-gluon plasma gets some play in a piece that talks about how, when it exists, it flows like water.