I'm late to the party (pal), as Ted Gioia has made a couple of TV appearances talking about his essay on how older music is crowding out new music.

I think it is, and not just because a huge percentage of new music is, um, gunk. A few years ago a band called Walk the Moon had a very catchy hit called "Shut up and Dance With Me." In addition to being a neat reminder of the classic Pearl Harbour and the Explosions "Shut up and Dance," it was a fun 80s-sounding throwback that topped the US rock charts and hit No. 4 on the Billboard Hot 100 pop chart. The next single managed #4 on the rock chart and #65 on the Hot 100. Two subsequent releases cracked the top 20 on the rock chart but showed up nowhere else.  "Shut Up and Dance With Me" would probably have earned Walk the Moon a couple of top 20 albums back in the 80s and a career that would last at least as long as Loverboy's.

Gioia offers a much more detailed take, but it seems to me the upshot is that the modern audience attention span isn't long enough to keep new bands or performers on top for much more than a song or two. And the music industry responds, which means we never really get to hear how a group or a singer might sound after maturing or gaining experience with songwriting and playing.

Kind of depressing. Think I'll go play some Meat Loaf. Which might mean I'm part of the problem, but since the new music I hear is usually very niche-y in style, there's not much chance of them falling from the charts.

Sometimes, it's the sneeze of a clown that causes the problem, not the tears...

Caleb Scharf, writing at Nautilus, notes some interesting things about one of the latest crypto-currency related crazes, called "non-fungible tokens."

Simply put -- and I admit upfront that I am not at all sure I properly understand this whole shebang -- NFT's are some kind of electronic or online asset to which provenance is unbreakably assigned. If the NFT is a digital image, for example, the same blockchain technology that backs crypto-currencies "marks" one image in such a way that no matter how it is copied, the original is always distinguishable from the copy.

In order to ensure a painting is real, its history is traced from artist's easel to purchaser's rec room wall. Should the history not be available, then recent advances in scientific testing can compare brushstrokes, pain composition, canvas, and so on. So a stolen painting that suddenly resurfaces is tested and can be pronounced real, establishing its provenance.

NFT's, as mentioned, use the same blockchain technology that backs up digital currency. The problem is that, as a part of its anonymity and validity, the computational work in a blockchain is widely distributed -- and highly power-hungry. Environmentalists have been grumbling about the energy use level behind digital currencies, but their defenders can at least point out that such currencies are a means of exchange and might have some utility.

It's hard to say the same about the utility of NFT's. If I take an online image and use it as, say, the background photo of a blog, I really don't care if it is the original. And if some people do care, unless we're talking about a request to take down a copyrighted image I don't care that they care.

Perhaps it's because I'm some middle-aged dweeb who has a job in the real world and deals with people who live in it, interacting with them as real people and thinking that's of some value that I can't stop thinking, every time I hear people talk about NFTs: "That's just about the stupidest thing I've ever heard in my life."

Until someone tells me how much money this or that NFT sold for, that is. That's even stupider.

Gen-X single men who have been exhibiting our generation's well-known slackitude, our time has come! 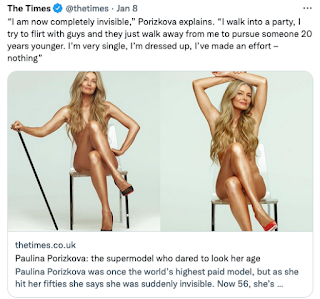 Our task is before us, gentlemen. I have every expectation we will acquit ourselves with honor and distinction.

Writing for the American Council of Science and Health, Cameron English outlines "four awful science journalism trends that should die in 2022."

The majority of the trends have been exposed or exacerbated by the pandemic and have a common thread as English presents them. They mainly fumble when that old-fashioned quality of "nuance" is required. Correct facts are used as the basis for significant overreaction, alternative explanations are shoved to the side, the amazing diversity and curiosity of science is covered over by being lumped as "the science" or "science," a point of view that overlooks the reality that settled ideas are usually not a goal, but a scientist's biggest target.

I know a few scientists and was in college with a bunch of students exploring its various fields, so I echo Isaac Asimov's statement that what makes scientists' eyes light up are data that seem a little wonky. Their greatest joy is not in saying "Eureka!" although figuring out a problem is a welcome development. No, a scientist's favorite phrase is, "Hmm. That's odd."

The kinds of errors English describes come from science journalists who have gotten so tribal in their outlook that oddity is crushed, ignored, explained away or called an "outlier." But in reality oddity means it's time to crack the knuckles, lean forward over the microscope or computer or data chart and say, "The game's afoot indeed."

If they are Sherlock Holmes fans, that is.

According to this story at MSN, viewers of the recent HBO 20th anniversary special of the release of the first Harry Potter movie learned several things. Ten, in fact, although when you read the story you'll find more than one that was already known to most fans of the series.

You'll also find out that an entire reunion special about the movies, which are based on some of the best-selling books of all time, can be done with their author shown in only B-roll archive footage talking about how hard it was to cast the title character.

You see, Potter author J.K. Rowling has staked her claim on the idea that gender is a fact. In an essay on her website she makes this and similar statements several times; acknowledging the reality of transgender people while insisting that those who claim there is no material difference between folks who transition to a gender and ones who are born to it are incorrect. Much of modern culture disagrees, and so naturally both sides frequently and calmly exchanged ideas as they sought to open everyone's mind to new points of view.

Just kidding! We live in a world where instead of flying cars scientists gave us Twitter, so the people who tweeted the more hateful, divisive, dismissive, inflammatory and angry posts the fastest won and we're treated to a spectacle of a Harry Potter reunion and reminiscence special that left out the woman without whom none of it would have happened. Whether one believes her views on gender are accurate or inaccurate and harmful, it's simply ludicrous to leave her out of a discussion of these characters and stories.

Rowling isn't completely erased, mind you. She appears in the aforementioned archive footage and is referred to now and again during the discussions. She's talked about a little, kind of the way that the late Richard Harris and Alan Rickman are. Of course, they're dead, while Rowling isn't. She's just an un-person, if I may borrow a term from another author.

Who made every ungrateful wretch in that special stinking rich.