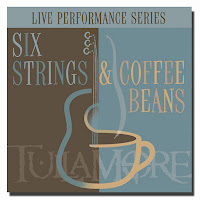 The 1960s have a lot to answer for. One of the decade's myriad minor crimes was the identification of folk music with reedy-voiced, seedy-looking guitar players strumming plaintive ballads that had all the fire and vigor of day-old damp ramen.

But folk music was originally just that: The music of the folks, which meant that there were dance tunes, comedy ditties, martial airs, blues laments and whatever else people might sing about instead of just excruciatingly self-serious love songs whined out by someone who needed a shave. And on the Renassiance-Faire circuit around the country one can find groups that perform such folk music. From a cappella sea shanties to worship and everything in between might ring out over folks gathered together to display their medieval costuming skills and sell endless numbers of pendants of pewter dragons holding glass marbles.

Tullamore is one such band, and this recording at a Fort Worth-area coffeehouse, named Six Strings and Coffee Beans after the venue, is their second live album and fourth overall. Disclaimer: At least two of the the band's three members will admit having met me.

Some of Six Strings' songs, like "Step It Out, Mary" and "A Man's a Man for A' That" are long-time staples of Tullamore sets. Others like "Follow Me up to Carlow" and "Such a Parcel of Rogues in a Nation" are new to their recorded repertoire. Both kinds sound very good in this setting -- something about folk music seems to come across better performed than just recorded in a studio. There's no scientific evidence that the song "knows" it's being played live and not recorded into a mixer so it may be just listener perception. But then it may be the listener perception that strengthens a folk song's impact to start with: Fairly simple melodies, relatively easy to sing even without training and designed to catch the ear will usually do just that.

And when played and sung well, as here by guitarist Mark Clavey, violinist Rachel Gaither and hammered dulcimist (?) Mary Hanover, that music will catch the ear enjoyably rather than irritatingly. Six Strings offers a mix of spritely and stately, melding songs with verses into dance tunes and reels that match it and make each song arrangement unique to the band. Clavey, Gaither and Hanover each take lead vocals on different tunes but also offer some wonderful harmonies in different combinations.

The best way to enjoy Tullamore and their brand of folk tunes is live (and if you do it at the University of Oklahoma's annual Medieval Fair you can do that for free), but if you aren't able to catch a show then a live album like Six Strings makes a strong substitute and fine experience in its own right.
Posted by Friar at 10:42 AM